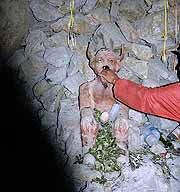 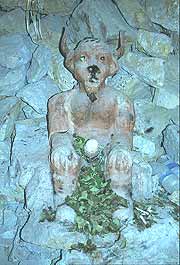 The legend tells that the Peruvian Indian, Diego Huallpa, was the original discoverer of the Potosi silver. One day he was herding his llamas, when he realized that two were missing. He set off to look for them. By night fall the cold took over and Diego had to stop to build a fire. He built his fire at the foot of the Mountain Potojsi. The tale says that the fire grew so strong that the earth beneath it started to melt, and shiny liguid started oozing from the ground. Diego then realized that he had discovered something the Spanish conquerors had a great appetite for. The Spanish eventually found out about the silver, which later lead to Potosí becoming an important mining center.

Large-scale excavation began in the mines of Cerro Rico (rich hill) immediately after Potosi's foundation as a Potosi Bolivia town and the first silver was sent to Spain. A mint, La Casa de la Moneda, was established in 1672, to coin silver and has later been constituted the largest civic monument in South America. At that time many churches were built and the city's population increased to nearly 200,000, making it one of the largest and wealthiest city in Latin America and in the world. During the early 19th-century, struggles for independence caused many churches to be looted and people started to leave the area. After independence in the early 19th century, attempts were made to restore Potosi's economy, but it was never quite recovered. To this day, Potosi still sits on a tremendous treasure in the form of magnificent architecture and history. The town is well known for its cultural content and beautiful paintings. On December 11, 1987, in Paris, France, UNESCO declared Potosi a World Heritage Site for the richness of its history and architecture.

Silver Mine in Potosi, Bolivia"Considered, in the 16th century, to be the biggest industrial complex in the world, the extraction of minerals relied on a series of hydraulic mills. The site consists of the industrial monuments, the Cerro Rico, where water is provided by an intricate system of aquaducts and artificial lakes, the colonial town with the Casa de la Moneda, the Church of San Lorenzo, patrician houses and the "barrios mitayos" which were workers' living quarters." http://www.unesco.org/whc/sites/420.htm>

With an altitude of 4,090 meters above sea level, Potosi is a very special place to visit, it is the highest city in the world. With this altitude the climate often offers cool weather and sometimes freezing rain.