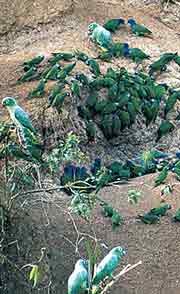 In order to view the Tambopata Research Center clay lick it is necessary to cross the river at dawn in one of our motorized canoes and find a good spot on the rocky beach in front of the clay lick, on the bank opposite to TRC's. There are three factors which influence the quality of the observation of the clay lick activity: the probability of occurence, the distance of observation, and the diversity and abundance of each species. Although the vast majority of our groups do see a degree of clay lick activity, even three mornings at TRC do not guarantee experiencing it, because parrots and macaws are very susceptible to the weather and do not descend in rainy, cloudy, windy or foggy days or when an eagle is in the vicinity.

Usually, hundreds of parrots and small green macaws (Red-bellied and Chestnut- fronted) descend to eat clay. It is also common to see about 20-40 large macaws on the clay lick, but not more than that, although it happens. During the months of May and June, large macaws are not frequent visitors of the clay lick, because their diets change, and these are the months when large macaw activity at the clay lick is the scantest. The largest concentrations of large macaws at the clay lick is seen in August and September, when you can get to see hundreds of them descending at once. Nevertheless, as with everything in the rain forest conditions are highly variable and difficult to predict.