Owing to its unique history, Belize has a fairly good conservation record. Many parts of the country have had, until recently, little road access and hence, relatively light development and exploitation. (As one USA government publication on Belize puts it, "No roads exist to large tracts of potentially arable land and timber" - which is just fine for conservation and, to a lesser extent, for ecotourism!)

Much of the development in colonial times was centered along the coast, with limited inland agriculture and logging. The southern half of the country, encompassing the Maya Mountains and Mountain Pine Ridge areas was too remote and rugged to sustain much development. In addition, there is some historical inheritance from the British colonial system of a conservation ethic - in name if not in actual practice: the British at least established protected forest areas, but they also allowed within those areas extensive consumptive uses such as logging.

The Belizeans themselves recognized the need for conservation, and their recognition was reflected in the very first set of laws they enacted upon their independence in 1981: two of the first five laws were environment-related. The end result of first British, then Belizean, rule is that, whereas many other Central American countries have only very small percentages of their forests remaining, between 65% and 70% of Belize is still covered by its native forest.

The high degree of preservation of Belize's forests, coupled with its increasing exposure to the world Protecting the wildlife of Belizecommunity by way of visits to the coast and cayes by beachgoers and divers, led to rapid growth in tourism from 1990 through 1994. Tourism slowed a bit and leveled off during the mid-1990s, when Belize acquired an only partly deserved reputation for being a fairly expensive place to travel. (Recently, a value added tax - VAT - has been slapped on many products and services, further raising prices.) Also, owing to a few instances of crimes being committed against tourists, particularly in the Belize City area, the country gained what is probably an unfair reputation as being dangerous. In truth, because Belize is a very small country, a few crimes easily become magnified out of proportion. 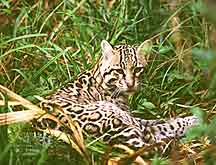 The present conservation and ecotourism outlook in Belize is this: It's a beautiful spot rich with rewards for adventurous travellers, but it's also a poor, developing coountry, with many of the typical attendant problems. Poverty is widespread and pressure is strong for rapid economic development - in the form of more agriculture, logging, industry; there is substantial and growing pollution resulting from development; and there is the usual corruption that favors poor conservation practices. But recognition of the need for conservation by governmental officials and by other Belizeans is growing. They realize the importance of conservation and the maintenance of pristine areas, as well as the current contributions and future potential such areas have for attracting foreign visitors and foreign investment, thereby providing jobs and helping the economy.

The government of Belize, even with good intentions and actions (a new cabinet-level tourism department, the Ministry of Tourism and the environment, and the recent passage of major environmental legislation, the Belize Environmental Protection Act of 1992), can do only so much. The problem, of course, is extremely limited money. Even the best environmental laws are of limited value without funds to hire environmental managers, inspectors, enforcement people, and park personnel. The result is that many parks and reserves exist in name only - tracts of land slated to be protected, but, in reality, left open to exploitation - because there is no money available to define the areas and hire on-site wardens or protectors.

Because the government cannot do much conservation management, habitat protection, or ecotourism development by itself, "partnerships" with private agencies that seek the same goals have been developed. Some of these agencies are domestic or international non-profit environmental groups, whereas others are for-profit groups or local community associations. The biggest such "partnership" is probably the one established between the Belize government and the Belize Audubon Society.

The Belize Audubon Society (BAS), formed in 1969, is Belize's pre-eminent environmental organization. Originally led mostly by foreign-born resort owners and managers, it is increasingly directed by native-born Belizeans. Almost from its inception, BAS provided technical advice on conservation matters to the Belize government, even helping to draft the plan for developing the national park system.

In 1982, owing to past successful associations, the national government approached BAS with an important, mutually-beneficial offer: to use their highly-motivated conservation expertise to administer, manage, and protect six major national parks and wildlife sanctuaries. The government, in effect, turned the job of preservation of some vital parts of wild Belize over to people they trusted to do it right. Since 1984, BAS has operated Crooked Tree Wildlife Sanctuary, Cockscomb Basin Wildlife Sanctuary, Half Moon Caye Natural Monument, Guanacaste National Park, Blue Hole National Park, and Tapir Mountain Nature Reserve. The deal? From the fees collected at the parks BAS administers, 70% goes to BAS for operations and management, 10% goes to the government, and 20% is placed in a trust fund the proceeds of which are slated eventually to be used for parks and other environmental programs.

The BAS role in Belize conservation continues to grow: the Society signed an agreement in 1994 with a Swiss conservation foundation to manage another wildlife refuge, the Shipstern Nature Reserve, in northern Belize. When you travel to Belize, contact the Belize Audubon Society for up-to-date information on the parks they administer (how to visit, where to go, what to see, where to stay, fees, etc.) as well as for other ecotourism information (The Belize Audubon Society, P.O. Box 1001, 12 Fort St., Belize City, Belize; phone: 501-2-35004; fax: 501-2-34985; http://www.belizeaudubon.org/; email: base@btl.net).