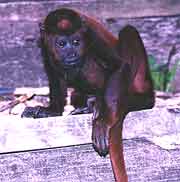 As you travel on your journey through Belize, you will have plenty of opportunities to come in View the Howler Monkeys in Belize with Adventure Lifecontact with the unique howler monkey. The Black Howler Monkey, Alouatta pigra, is known as the "baboon" in Belize, and it is the largest monkey in Belize and one of the largest in the Americas.

Howler monkeys belong to the family Cebidae, and there are at least six different species. They are the noisiest animal in the Belize jungle and they can be heard up to a mile away. The howler monkey is about 2-3 feet in length and weighs about 15 pounds.

They live in Central and South American Rainforests. The canopy layer of the forest is their home, although you will see them spend time on the ground as well.

Their diet consist mainly of fruits and nuts. However jaguars, other large mammals and large snakes have howler monkeys as part of their diet, so the monkeys spend their day trying to stay out of those animal's paths. The monkeys love to irritate jaguars from high up in the canopy. They will sometimes throw sticks and branches at the jaguar below.

Howlers monkeys "wake up" the rainforest in the morning and sing it to sleep at night. Sometimes they "howl" just before it rains. They live in troops of 4 - 10 or more members depending on the species. Each troop has its own territory in which it feeds and lives. The size of the territory depends on the size of the troop, ranging from 3 to 25 acres. The female will give birth to one young at a time. Twins are possible, but very rare.

Howlers are good swimmers, have excellent vision and can see up to one-half a mile. They have a long tail and their colors can vary from reddish to brownish to blackish. The howler monkey's life span is about 20 years. The biggest threat to their lives is loss of habitat and poaching.