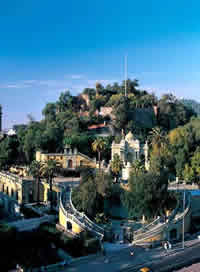 Central Chile is the cultural nucleus of the country. All of Chile's largest cities are located here, as are most of its universities and industries, its vineyards, finest agricultural lands, colonial and early republican architecture. In fact, central Chile is something of a microcosm of the country, balanced between deserts to the north and forests to the south, with the capital poised between the highest peaks in the Americas and a host of premier beach resorts.

Santiago, the capital, is a focal point of Latin American commerce and the point of entry for nearly all international arrivals. Clean and modern, Santiago sits in a basin between the Coast Range to the west and the Andes to the east. World-class ski areas in the central Andes lie only forty-five minutes away, up steep switchbacks which climb over 7,500 feet in twenty-six miles. Numerous vineyards surround the capital; hotsprings, seventeenth-century colonial haciendas, and national parks in both the Andes and the Coast Range, all make easy day trips. At night, visitors may choose from a variety of restaurants serving all types of regional and ethnic cuisines, and excellent hotels assure a good night's sleep for business or pleasure.

To the west, modern highways connect with the coastal cities of Viña del Mar, Valparaiso, and San Antonio. Like Santiago, the central coast enjoys a Mediterranean climate, with short, mild winters and a sunny summer season lasting over eight months. Here a chain of white-sand beaches and coastal resorts offers something for every taste, from luxury hotels to secluded cabañas, picnics on the beach to fresh seafood in an open-air restaurant.

To the north, the climate grows gradually hotter and drier. The chain of beaches and resorts continues north to La Serena, Chile's second-oldest city now known for its production of pisco, a grape brandy which follows closely behind wine on the list of Chile's preferred drinks. To the south, the central valley comes into its own. These were the fertile lands first claimed by the Spanish conquistadores; here the Chilean huaso (cowboy) still spends his day astride his horse in the traditional manta (poncho) and sombrero, honing his skills for annual rodeo rodeo competitions.

To the east, the Andes are an unforgettable presence, cloaked in white in winter and spring, storing meltwater for the rivers which irrigate Chile's heartland. Beyond that first line of peaks, visible from anywhere in the Central Valley and from many places along the coast, lies a wilderness of glacially sculpted canyons, glaciers and microclimate forests, alpine lakes and thundering rivers. Lateral roads lead into the cordillera, providing access to numerous national parks and truly endless opportunities for visiting, skiing, hiking and mountaineering, mountain biking, horseback riding and rafting.