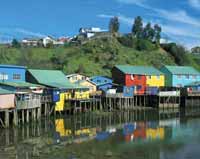 The Isla Grande of Chiloé is South America's largest island and among its most striking cultural anomalies. Divided by the gentle peaks of the Coast Range, Chiloé's eastern and western coasts are two worlds apart. To the west is a wilderness of endless beaches, dune habitat, and temperate rainforests, much of it protected in one of Chile's most forgotten national parks. To the east are the scattered islands of the Chiloé archipelago, sheltered from Pacific storms, intensely cultivated, home to a traditional culture of subsistence farmers, fishermen, and craftsmen.

The history of Chile, both human and natural, is rife with episodes of isolation. None is more dramatic, or more readily apparent, than the case of Chiloé. Cut off from the growing colony in Central Chile by a vast territory of impenetrable forests and hostile Mapuche Indians, the inhabitants of Chiloé depended directly upon the Viceroyalty in Lima for provisions. A ship came once a year, if that, exchanging astronomically priced manufactured goods and supplies unavailable locally - which is to say, nearly everything - and buying for a song the fruits of the islanders' labor. 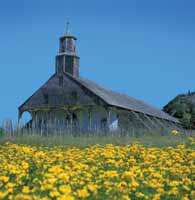 Over the course of two centuries, the Spanish population mixed with the native, and all learned to make do with what limited resources could be culled from the sea, the forest, and the earth. Meanwhile, the Jesuit order made this corner of the earth their special responsibility, erecting schools and over two hundred elegant wooden churches, nine of which are protected as national monuments. A rich mythology - populated by strange trolls, sea monsters, and eerie ghost ships - is yet another mark of Chiloé's singular history.

Today, Chiloé balances wild, unbridled nature with one of South America's most remarkable traditional cultures. Renowned for its seafood, its woolen handicrafts, and the warmth of its people, Chiloé is still a largely unknown tour destination for walking and biking, fishing, paddling and birding.