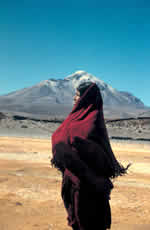 Northern Chile is a land of extreme contrast, where two uniquely Andean environments, the Altiplano and the Atacama Desert, combine with unpredictable and overwhelmingly beautiful results.

The vast and colorful Atacama Desert is said to be the driest desert in the world. In some parts of this desert, no precipitation has ever been recorded.

The Altiplano, on the other hand, receives tropical rains in January and February. Altitude, rather than aridity, is the limiting factor governing life on this airy plateau: only the hardiest and most highly specialized flora and fauna can survive the vagaries of life above 12,000 ft.

Speckled with lakes, marshes, salt flats, and geysers, crowned by 20,000 foot volcanoes, the Altiplano is Chile's link with the great civilizations of the Central Andes. Today, a traditional society of Aymara Indians wanders the Altiplano with their domesticated llamas and alpacas, congregating periodically for festivals in eerily whitewashed 'ceremonial villages'. A system of spectacular national parks -- including Lauca National Park, a UNESCO World Biosphere Reserve -- protects vast expanses of this singular landscape. Some of the rain that falls in the Altiplano drains west, into the Atacama Desert. Where it emerges, this water transforms the landscape, creating a trail of vegetation and cultivation, human habitation and wildlife habitat, salt flats and eventually, salt mountains.

These trails of water and life have been recognized and utilized by humans for eons. San Pedro de Atacama and numerous oases along the río Loa and río Salado served as way-stations on pre-Inca trade routes linking the Amazon, the Altiplano and the coast. These caravans followed desert trails now marked only by giant geoglyphs, the most dramatic of the archaeological remains found in northern Chile.

From north to south, the principal destination cities in northern Chile are Arica, Iquique, Calama, San Pedro de Atacama, and Antofagasta. Of these, all but Calama and San Pedro are coastal cities, with fine beaches where clouds - let alone rain - are never an issue. Accommodations, transportation, and other tourist services are on a par with the capital, and each city provides access to a distinct portion of the desert, sierra foothills, or Altiplano. Trekking, ethnic and overland tours, mountaineering and archaeological tours are among the most popular activities in Northern Chile.

Near the southernmost limit of the region, the towns of Copiapó and La Serena provide access to narrow east-west agricultural valleys best known as producers of Chile's beloved pisco (grape brandy) and site of the southern hemisphere's clearest skies, which attract professional and amateur astronomers from across the globe.