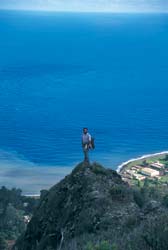 This tiny group of islands, located some four hundred miles off the Chilean coast, includes what is probably literature's most famous 'deserted' island. Isla Robinson Crusoe is the very island on which the Scottish mariner Alexander Selkirk was marooned for over four years: his recollections of the ordeal gave rise to Daniel Defoe's famous novel and the island dreams which so many share.

Rising dramatically from the Pacific to jagged peaks exceeding 5000 feet, the islands of the Juan Fernández archipelago are home to one of the most highly endemic ecosystems in the world. Over 60% of native plant species on the island are found nowhere else of earth, while notable endemic fauna include 6 species or sub-species of birds and the Juan Fernandez fur seal, back from near extinction around the turn of the century. Today, the entire archipelago is protected as a national park and UNESCO World Biosphere Reserve, boding well for the preservation of biodiversity on Juan Fernández.

Isla Robinson Crusoe has the archipelago's only permanent population, centered in and around the town of San Juan Bautista, with a local economy based largely on the harvest of delicious spiny lobsters. Tourism in the islands is decidedly low-key, with a number of comfortable pensions and restaurants available in San Juan Bautista. Hiking trails, fishing, birdwatching and diving are all excellent options for active travelers.