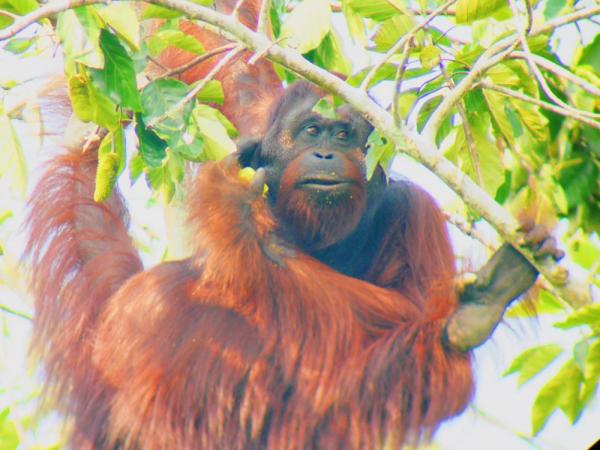 I wearily boarded a Malaysian Airlines flight, cut across the northern peninsula of Borneo and landed in the busy, eastern port city of Sandakan.  A bright-eyed guide from the Sukau Rainforest Lodge greeted me and seven other travelers at the tiny airport exit, ushered us into a gloriously air conditioned van and took us to the Sepilok Orangutan Rehabilitation Center.  I have been lucky to see quite a few monkeys in the wild during my travels through Central and South America, but I had never seen one of the great apes.  We were briefed on the center's work to return injured, captured, and orphaned orangutans to the wild, and then escorted along a winding wooden boardwalk into the forest.  Numerous "Quiet!" signs were posted along the way, and as we ventured farther down the path complete silence fell over our group.  We arrived at a large viewing platform, about fifty meters away there was a small wooden deck built around a tree.  Even though no one was making a sound, the anticipation was deafening, and you could almost feel our collective excitement peak as a short man in a blue uniform climbed onto the deck with a basket of bananas strapped to his back.  He took a seat, swung the banana backpack around, and within seconds the first orange, lanky orangutan came swinging onto the deck to greet him!  This orangutan was soon joined by another five apes, ranging in size and hairiness but all eager to eat as many bananas as possible. 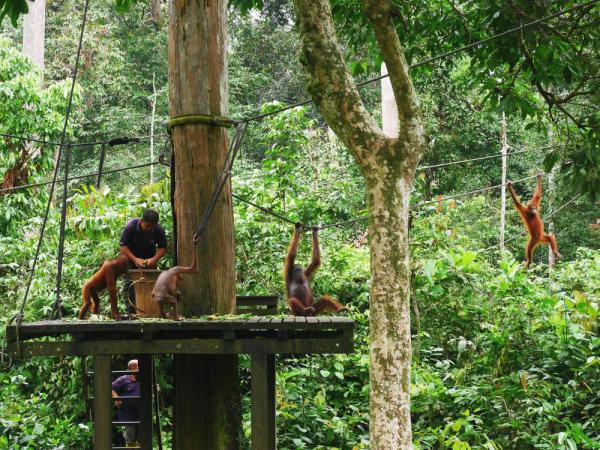 My first encounter with orangutans in Borneo! 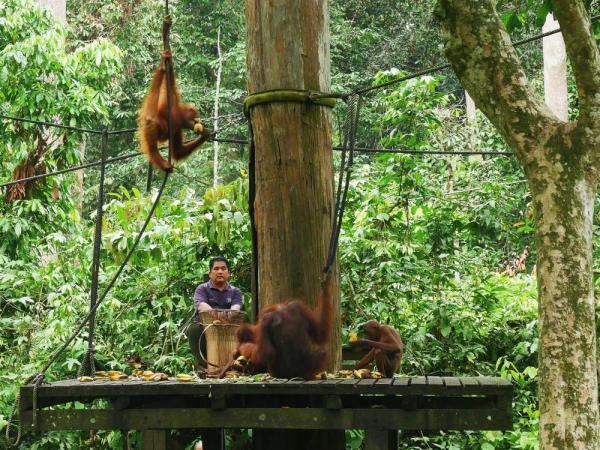 I was fully aware that this could be my only orangutan encounter.  Sadly, the Bornean orangutan is listed as endangered, with a population that has decreased more than 50% over the past sixty years.  Habitat fragmentation from logging and land conversion for agriculture, illegal hunting and animal trade have left the Bornean orangutan with a struggling population, but the efforts of the Sepilok Rehabilitation Center and its partners have helped immensely.  I met a Japanese couple during the tour who work for the Borneo Conservation Trust, a Japan-based NGO that is working to establish a wildlife corridor along the Kinabatangan River.  They have purchased 50 hectares over the past six years, and with an eventual goal of 20,000 ha, their work is cut out for them, but it's encouraging to see this type of international concern for the welfare of these creatures and their habitat.  Our guide proudly explained that Sabah is the only state in Borneo where the orangutan population is actually growing, an amazing feat of wildlife conservation and a great sign for Borneo's great ape. 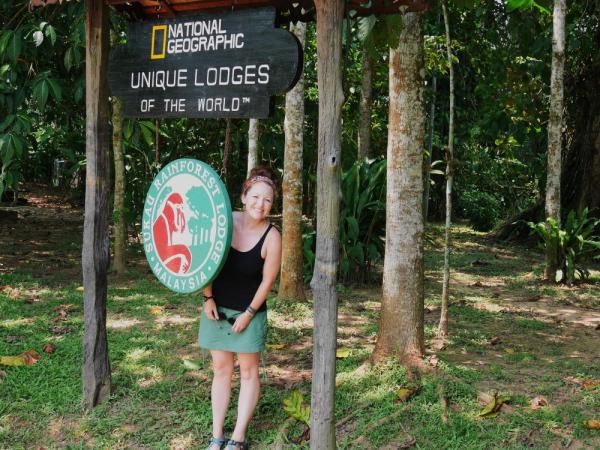 Very excited to be staying at one of the world's Unique Lodges! 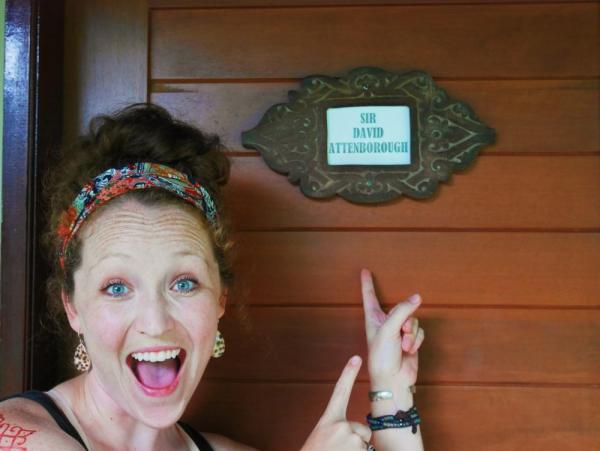 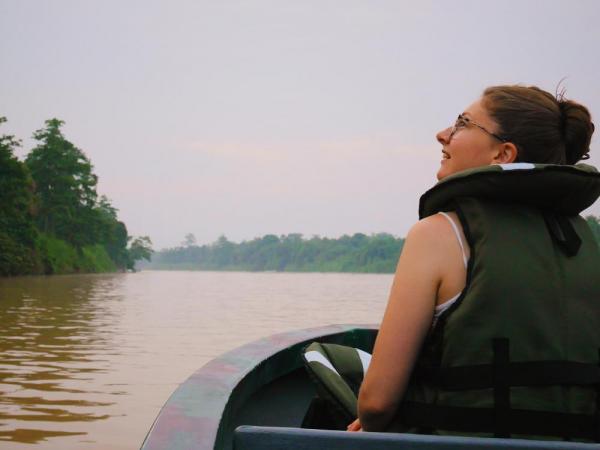 We left the orangutans and headed for the ocean.  A speed boat wove us through Sandakan's coastal islands and into the mouth of the Kinabatangan River.  A two hour charge upriver landed us at the Sukau Rainforest Lodge, recently named one of National Geographic's Unique Lodges of the World.  Imagine my surprise when I walked into the open air lobby, looked up, and laid eyes on a mother orangutan and baby lazily hanging in the dipterocarp tree above the lodge!  My guide managed to pull me away from the orangutan and handed me the key to my room.  "You're lucky, this is the room Sir David Attenborough stayed in while he was filming a documentary here in 2011."  As if the orangutan wasn't enough, holding the key to David Attenborough's old room took my nature-nerd level up to new heights, and frankly I'm not sure how I ever left the place. 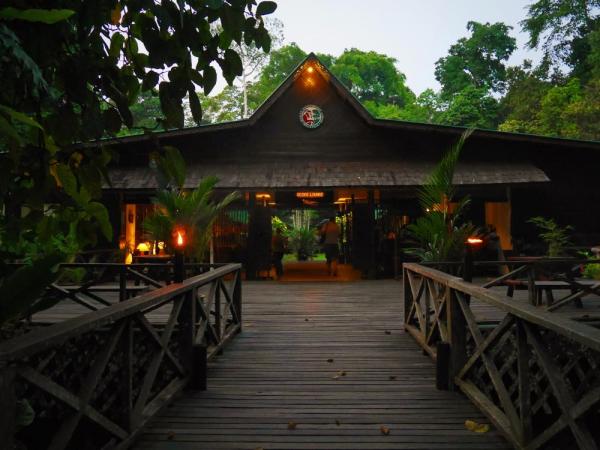 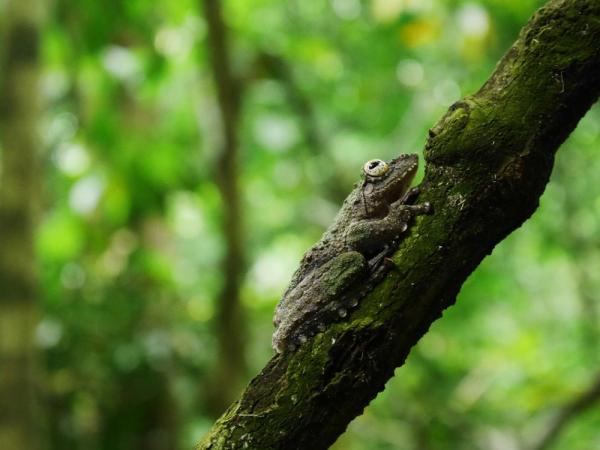 A tree frog along the forest trail behind the lodge

The next morning, the mother and baby were replaced by a large male orangutan.  Our guide set up a spotting scope, and I managed to angle my camera over the scope lens and get some great shots of the ape eating his breakfast.  In Malay, "orang utan" means "man of the forest,"  and it was more than easy to see the 97% genetic similarity between this long-haired fellow and myself. 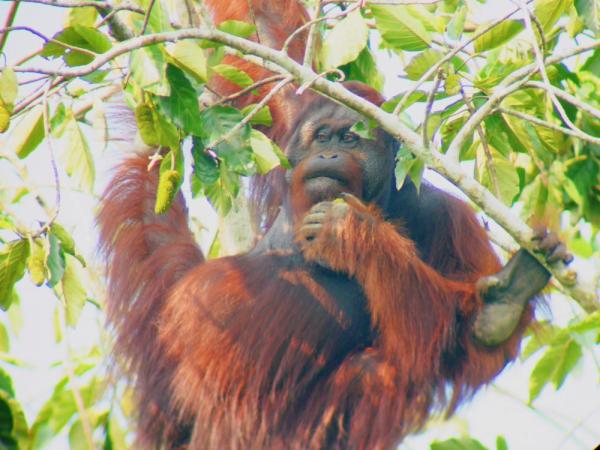 A male orangutan sitting in the tree above the lodge 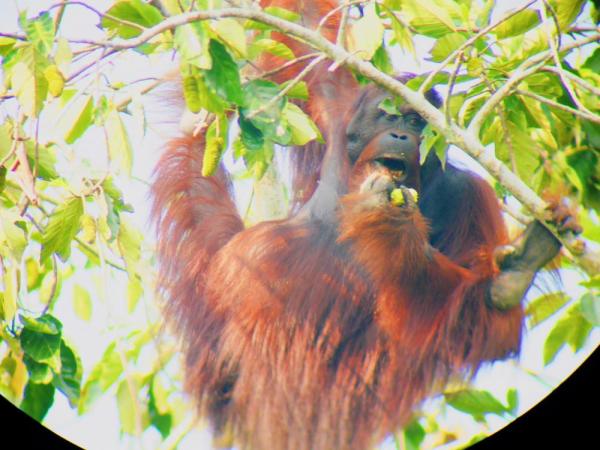