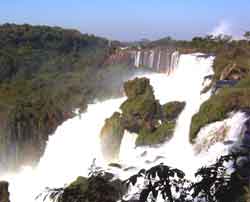 As one nears the Falls, the vegetation grows to such an extent that the sky is completely covered in certain parts of the route. The damp earth grows a deeper red, the river becomes more lively, increasing its so that, together with its increasing heightened roar, we realize that we are taking a trip to a rather unique corner of the world.

At last, deep within the rain forest, we come across one of the most stunning spectacles in the world, the Iguazu Falls, declared as a Natural Heritage of Humanity by UNESCO. It is an impressive sight, where some 275 falls plunge into space from a height of 80 metres.

The Falls can be reached by paths, footbridges and zodiacs, giving a number of different perspectives, it is also possible to get close up to the Garganta del Diablo (the Devil´s Throat), a breathtaking experience where the deafening waters crash down only a few metres from your boat.

The "Esteros del Iberá" - or Iberá Marshlands - (provincial nature reserve) come some 20,000 square km of a wonderful wild aquatic world of lakes and marshes, situated in the Corrientes province. The word "iberá" in the indigenous Guaraní language means "brilliant waters".

The Corrientes province (88.000 square kilometers), located in the north-east of the country, is part (together with the Misiones and Entre Rios provinces) of the so-called "Argentinian Mesopotamia", a 200,000 square km area bordered east and west by the large Paraná and Uruguay rivers.

The Esteros del Iberá boast a closed, unpolluted system. Although to the north it almost meets the Paraná river, there is no direct inflow. The marshes and lakes of Iberá are fed only by rain water (2000 mm in the year). A slight slope to the south east (10 cm per kilometer) causes the water to run off very slowly, into the winding Miriñay river (and finally into the large River Uruguay), and into the River Corrientes (flowing south into the Paraná river). There are no industrial or mining activities nearby.

Some parts of Iberá are covered by sand dunes, formed during a period of drought before the marshes were created by a radical climate change. Within the area there are some lakes, the largest in the south-west, like Laguna de Iberá (52 square km) and Luna (80 square km).

The extensive area is very humid and almost uninhabited but for the great variety of wildlife: The variety of birds is staggering :380 different species of birds: predators such as hawks and owls; numerous species of ducks and other fishing birds, like the juan grande stork, spoonbills and herons; woodpeckers, flamingoes, ibis, anhingas and many others.