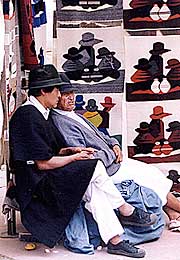 Ecuador's Gringo Trail runs due south for about 250 miles from the sedate town of Ibarra, down the middle of the Avenue of Volcanoes to the border town of Loja - roughly 12 hours as a South American bus drives. Gringo Trail? I had heard of the Inca Trail before my first South America tour, but never the Gringo Trail. Along this ancient trail (it's at least as old as the pothole strewn Pan-American Highway) lie the most popular traveler's towns in Ecuador - Otavalo, Quito, Latacunga, Banos, Riobamba, and Cuenca. All these towns host charming hotels run by local families and nearby pizzerias serving piping hot Italian pies and calzones (in Ecuador?).

There's always a choice of clubs with collections of empty import beer bottles and European and North American dance music blaring from enormous speakers. And generally each place hosts a half-dozen travel agencies clustering on the main street; all of them renting the same mountain bikes and selling the same tours of the Amazon and the nearest snowcapped volcano.

The Gringo Trail is a fun and comfortable place to travel, but after four months in Ecuador, I wanted something different. I wanted a challenge, a discovery. So I opened my guidebook to a page that had a one-paragraph description and a tiny map of an area I had heard nothing about. From Latacunga I would travel West up the Cordillera Occidental towards the Pacific Ocean. From there I didn't know. The book gave no clear suggestions…and that was the point!

"There. The bus stop is over there," was the ambiguous answer I got from the lady selling assorted fruits on Latacunga's main street. I was off to a late start and no one seemed to know exactly where the bus was to the first town on my journey. Across the main highway and up a short street that abruptly ended in a dirt rode, I finally find an old school bus with the word "Zumbagua" painted on the front…and it's empty. Don't worry, I'm told by a man standing nearby. It leaves "soon." In a country whose idea of being on time is measured in hours and even days, this isn't encouraging news.

A banana, an avocado and two hours later, I find myself crammed against a window with a shy "campesina" on my right, my backpack on my lap, and a three foot tall canvas sack of what feels to be potatoes on her lap and my shoulder. This is a communal bus used almost exclusively by indigenous people from the rural Andes, "campesinos" -- which means that if the roof is full and the floor is full, then expect to pull your weight by hosting a child or a sack on your lap.

Everyone takes the crammed bus in good humor. After all, the Indians are going home from the foreign chaotic cities to their sacred mountains, canyons, and rivers. Myself, I'm off to the high Andes of pre-Columbian myth. A place where Quechua is spoken among friends and family, fields of corn and quinoa grow in checkerboard patterns on near vertical mountainsides, and local spirits reside in every stream, mountaintop, canyon and cave.

When we finally lumber into Zumbagua around one o'clock, the Saturday market is in full swing. Indian women in long wool skirts pack the dusty plaza buying and selling bananas, tomatoes, guavas, apples, avocados, and food typical of the highlands such as rye, wheat, and all shapes, sizes and colors of that Andean staple, the potato. Steak-on-a-stick roasts on a nearby barbecue. Or maybe it's llama-on-a-stick? Either way I'm famished and buy two from the short Indian man wearing a blue faded fedora and carefully turning each stick.

Wandering down to the lower plaza I watch as chickens, pigs and a skinny cow are bartered and traded back and forth. A dozen chickens poke their red feathered heads through a canvas sack. They sit peaceably enough until a large woman roughly grabs hold and proudly drags her squawking purchase away. A young girl and her mom lead a couple piglets away on short tethers. They happily amble along behind their new keepers. A mix of Quechua and Spanish fills the air as I wander through the stalls buying the odd apple and "empanada." Nothing is familiar. No pizza and espresso here, nor colorful tapestries with "Ecuador" written across to attract tourist dollars. People are simply going about their rural lives and enjoying the market day.

Around four in the afternoon the market just seems to melt away into the hills and adjacent canyon. By five it's just me and a German couple in the square, sitting on a bench and laughing over travel stories. I'm also wondering where I'm going to stay tonight. The town looks like a deserted ghost town with all the market people gone. Earlier I had knocked on the door of a newly painted hotel, but the place was locked up tight. The other place I had checked out wasn't more than a concrete cell with a mat on the floor. I know I was looking for adventure, but a warm bed and hot shower in the Andes make all the difference.

When the conversation turns to hotels, my new friends assure me that the new Condor Matisse Inn that looked so nice is open. They had dropped their bags off in the early morning and the innkeeper assured them he would be back in the evening. Sounds a bit chancy, but I knew that one way or the other I had company that night. We decide to try finding a meal at Zumbagua's only "tienda." At the least we figure we can get some bread, chocolate and beer for the night.

The little store doubles as a café. In reality, it seems that the owner's wife lets the stray traveler eat with her family. The children are pressed into service as waiters and the three of us sit down for the "plate of the day" - slang for soup, rice and mystery meat. Tonight we're in luck. The mystery meat looks like one of the chickens I saw squawking in the sack earlier. The food by itself tastes a bit bland, but a few teaspoons of "aji" (local pepper sauce found throughout the Andes) and a foot tall bottle of Ecuadorian beer helps it go down without a thought of tomorrows Montezuma's revenge on my stomach.

The family is super nice and tells us of Laguna Quilatoa an hour's drive from here. It's an emerald lake set down a thousand feet in a volcano'scrater. Apparently there are a few "cabanas" that the local artists rent. The Quilatoa area is the home of a special Ecuadorian art called "Tigua." The Indians here make the best traditional masks and paint intricate scenes of Andean life on pieces of stretched sheep's hide. I've seen these all over Quito, and I'm excited for tomorrow.

The light above the door of the Condor Matisse Inn is on when we step out into a the cool night. The innkeeper is a great guy. He's proud of his new hostel and apologizes for not being around earlier. There's hot water and the beds are new, so I'm a happy camper who's glad to not be camping.

From the porch the three of us sip Chilean wine, talk about home, and where we're going tomorrow. It was a good first day off the Gringo Trail. Llama-on-a-stick isn't so bad and the family that shared their dinner couldn't have been friendlier. My German friends are heading back to Quito to catch flights home tomorrow. I'm off to Laguna Quilatoa and the cabanas I heard about tonight. They say there isn't a bus tomorrow, but I'll figure that one out later. "Prost!"