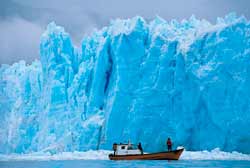 Patagonia is the scene of the world's great travel adventures. Even if we know little of the place, the name itself inhabits our subconscious, whispering of an unknown finger of the earth, el fin del mundo. We picture large silent spaces, tempestuous seas, windblown solitude.

The first Europeans to lay eyes on this landscape were led by Ferdinand Magellan, who pioneered passage through the treacherous strait that now bears his name. His expedition named the mainland 'Tierra de los Patagones,' unwittingly spawning the myth of a race of Patagonian giants. To the south, they saw the horizon darkened by smoke from the natives' fires, and named the great island Tierra del Fuego. The legend of Patagonia was set in motion.

The indigenous groups who inhabited Tierra del Fuego deserved to be legends, as these were the world's first and greatest adventurers. In arriving on Tierra del Fuego they had completed the world's furthest human migration, arriving finally at the very end of the earth, where the Andes disappeared into the sea and glaciers flowed to the water's edge. With nowhere else to wander, they stayed and fished the coast in canoes, collected shellfish, hunted guanaco and rheas on the pampa. Photos taken at the turn of the century depict a stone-age culture where extremity had crystallized: the end of the road for the most restless wanders in history. 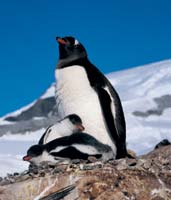 To the east of the Andes, the Patagonian pampa is an immense desert, by some accounts among the five largest deserts in the world. West of the Andes is another world. Here both the Central Valley and the Coast Range have sunk into the Pacific; what were once glacial valleys are now fjords, and what were once mountaintops are now islands. Hotsprings lay revealed by coastal erosion, while great glaciers further fragment the landscape, necessitating maritime or air travel. Great forests cloak the Andes from the Pacific shoreline to the continental divide, bisected by surging emerald rivers carrying glacial silt to the sea and providing habitat for fearless trout and salmon.

This immense territory is best understood as two separate regions, separated by the vast expanse of the Southern Patagonian Ice Field. Northern Patagonia is one of the world's last great expanses of wilderness, accessed by a gravel highway known as the Carretera Austral, completed in 1988. Even today, road access to the region is not complete, and travelers on the Carretera Austral must hop ferries across the mouths of the great fjords. Here the port of Chaitén provides access to the northernmost portions of the Carretera Austral, including truly world-class rafting and flyfishing, and cruises to glaciers and island hotsprings. Further south is the city of Coihaique, capital of the Aisén province and an ideal base for flyfishing and overland trips on the southern Carretera Austral, to lago General Carrera and the Northern and Southern Ice Fields.

Southern Patagonia, known as Magallanes, is a world apart, where the broad expanses of the pampa meet with the glacially sculpted spires of the Andes. Torres del Paine National Park and World Biosphere Reserve is the most famous of the vast protected areas in Magallanes, preserving habitat for guanacos, foxes, rheas and flamingos. South of the park is Puerto Natales, terminal for southbound ferries from Puerto Montt and operations base for hiking and horseback trips, glacier cruises, and overland trips.