An Accessible Slice of Eco-Heaven: Costa Rica Travel at its Best

"We try to teach what we live," says general manager Geiner Guzmán, eloquently summing up years of sharing conservation efforts with visitors to the simple and profoundly beautiful La Cusinga Lodge next to Ballena (Whale) Marine National Park, outside Uvita on the southern Pacific coast.

The rooms and dining areas at La Cusinga (which means fiery-billed Aracari) are not particularly luxurious, they do not have expensive furnishings and fancy details. Expect no jacuzzis, no mints on your pillow. But upon entering our large dormitory-style room, after a drive through the winding Tres Hermanas farm, we fell in love. We were absorbed by the nature surrounding us on all sides of the cabin, from the phenomenal view of the beach below and the distant Tres Hermanas and Ballena rock islands, to the birds chirping outside the wrap-around windows. Now this is Costa Rica travel.

The room and the furnishings are practically incidental; as a visitor at La Cusinga Lodge one is nothing more or less than a visitor in a carefully preserved slice of heaven in the middle of the rainforest. Small details such as fresh flowers, soap dishes made of conch shells and wooden furniture made by hand on the property add rustic charm. Several cabins dot the property, with four accommodating up to three people and two others with space for two. Dormitory-style lodging is also available for visiting student groups.

And if you're looking for Costa Rica travel hospitality, this is the spot. The nearby open-air kitchen/dining area has several tables, where howler monkeys are often spotted in the mornings. Meals are a family affair, with Rita Valverde, Guzmán's cousin, cooking and Guzmán sharing the table with guests. For lunch, Valverde served simple cheese-and-tomato sandwiches on whole-wheat bread, and for dinner a delectable fresh red snapper and mixed vegetables, with a compote of manzana de agua from the surrounding trees. The family tries to incorporate healthy, organic ingredients and fruits and vegetables from the lodge's gardens, such as papaya slices from the trees and mint from the garden for after-dinner tea. They don't serve alcohol unless guests specifically request it. 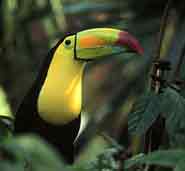 This rare find has a great history in the Costa Rica travel industry. John Tresemer, Guzmán's stepfather, came from the United States and bought the Tres Hermanas Farm 32 years ago, when there were no paved roads and locals rode on horses to get around. Tresemer was part of the successful effort to create the Ballena National Park in 1989, to protect the Pacific hawskbill turtles and the visiting humpback whales, and was involved in the preservation of Cocos and Caño islands. Tresemer wrote "The Gringo's Hawk" about his experiences, under the nom de plume Jon Maranon. He, and now Guzmán, is also involved in the organization ASOPARQUE, which maintains the national park and fights against excessive development in the area.

As we noticed on this delightful Costa Rica travel experience, the family conservationist mentality extends to minute details. All furniture is made from trees on the farm, and solar panels and hydroelectric energy run the entire lodge from a nearby creek. An immense reforestation project begun by Tresemer has allowed for native and non-native trees to flourish and contribute to the incredible variety of fauna and flora at the farm. Plans also call for an extended organic garden.

Guzmán had been living in Washington, D.C. after completing two Master's degrees, in International Business in Miami and Business Administration in Mexico, but moved back to his childhood home to manage the lodge four months ago. He is attempting to expand the operations slightly, by opening it up more to nature-loving tourists in addition to groups and by constructing new cabins.

"We want to grow to the point of being sustainable," said Guzmán. "I want to market it, but not mass market it."

Costa Rica travel activities include guided tours of the trails and reforestation projects, as well as free surfing lessons, fruit and herb gathering and tortilla-making.


We toured the Sendero de Ajo, one of the winding trails through the farm's primary and secondary forest, with knowledgeable guide Manuel Mejia, who has worked on the farm for more than 20 years. He explained that 1,800 teak trees had just been planted, while 18-year-old trees were now ready to be cut down. To look at the expansive forestland, full of tiny blue frogs and howling monkeys, one would never know it had been level pasture land 30 years ago. Mejia also proudly revealed the prize trees, two huge Ajo trees, one of which Tresemer estimates is over 1,000 years old.

"John brought another mentality - that the people should conserve the nature around them," he said.

For those of you craving athletic Costa Rica travel, there are plenty of heart-thumping activities. Another trail, Las Raices, extends down past the private property of Tres Hermanas through layers of forest toward the enticing Playa de Arco beach below. When we arrived after the steep but refreshing 20-minute walk through the woods, we had the beach completely to ourselves. There is a small waterfall to bathe in and a natural cave visitors can walk through. The water is perfect for swimming: warm, with enough waves to jump, but no pounding surf to mar the absolute calm. The hotel can also arrange swimming with dolphins, sea kayaking and deep-sea fishing trips.

To get a true sampling of the efforts made at the lodge, one need look no further than the guest book.

"To find a place like this makes me realize that there are some people who truly have what's best for the earth at the core of their philosophy," said visitor Roger Everhard, from Apple Valley, Minnesota.

And what a great philosophy that is for Costa Rica travel.