To the north of Arequipa in Peru is the higher course of the Colca river valley whose deep canyon is renowned among rafters. The section before the canyon consists of an encased valley that runs from east to west, beginning in the cold puna and running down to warmer regions, showcasing the region's great scenic beauty and cultural attractiveness.

An ethnic group, bearer of ancient and still strong traditions, has dwelled in the valley for more than 2,000 years. They are the Collaguas who arrived in the Colca valley from the high regions and by their language and customs seem to be descendants of the Aymaras. Even under the Inca dominion, they kept themselves relatively independent and preserved their own traditions. It is said that the supreme Inca, Mayta Capac, married a Collagua princess in order to formalize the conquest of the valley, and he built for her an elegant country house made of copper near Sibayo. 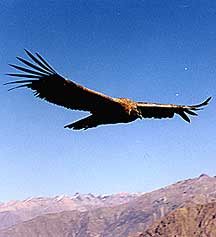 One of the survival skills of the ancient Colca people was the ability to store large amounts of grain for hard times. The warehouses, known as "colcas", gave name to the valley. In the "cool" caves of Pumunuta, it's possible to see circular colcas made of mud and straw with diameters of up to one meter. Andes Condors can be viewed in Peru's Colca Canyon

Another area attraction is the fantastic Andean Condor. Because the valley is so deep, the rising winds are surprisingly strong and big condors take advantage of them to soar gracefully into the sky. Between Maca and Cabanaconde, where winds are even stronger, is the Cruz del Condor, an observation point perfect for watching the condors while they fly majestically. Our Panoramic Peru tour takes you to visit the Colca Canyon and Cruz del Condor, among other fantastic spots throughout the country.

To read more about this itinerary, jump to
https://www.adventure-life.com/peru/itinerary.php?code=PP16